Posted on July 4, 2012 by Diocese of Massachusetts | Leave a comment

As their stories were told one by one, the late Pauli Murray, Verna Dozier, Mattie Hopkins and Anna Haywood Cooper—legendary black women of the Episcopal Church—were as much a part of last night’s Union of Black Episcopalians (UBE) gala dinner event as the four women who were being honored with inaugural awards in their names.

“It’s a moving experience to be with so many of my friends in the UBE and to have this joyous reunion, but it’s especially moving to be here in the presence of the memories of these great women,” Massachusetts deputy Byron Rushing told the gathering as he presented the Verna Dozier Honors Award to House of Deputies president Bonnie Anderson, whose term ends at the close of General Convention.

Dozier was a noted Episcopal Church educator and author who focused on Bible study and claiming the authority of the laity, and whose great skill, the Rev. Canon Sandye Wilson of Newark told the gathering, was “teaching people how to honor the God in other people.”

The Rev. Altagracia Perez, Rector of Holy Faith Church in Inglewood, Calif., received the Pauli Murray Distinguished Humanitarian Service Award.  Murray was, in 1977 at age 66, the first black woman to be ordained an Episcopal priest.  Prior to that she worked to address injustice and promote reconciliation between races, sexes and economic classes through her work as a lawyer, writer, poet and educator.

The Mattie Hopkins Honors Award went to Deborah Harmon Hines, Ph.D. of Worcester.  Hopkins was an educator and social activist in Chicago who was instrumental in founding the UBE and someone of “uncanny political sophistication,” according to presenter Nell Gibson of New York, who, Patricia Abrams of Chicago added, “gave people the courage to do things they didn’t know they could do.”

The Rev. Dr. Kelly Brown Douglas of Goucher College received the Anna Julia Haywood Cooper Honors Award for being “a leading voice in the development of womanist theology.”  Cooper was an educator, advocate and scholar whose first book, A Voice from the South: By a Woman from the South, published in 1892, is considered one of the first articulations of black feminism.

The evening also included a roll call of women who are bishops—including Massachusetts’ own Gayle E. Harris and Barbara C. Harris.

After that there was dancing. 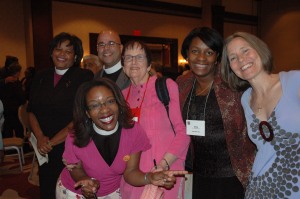 [Read more, including coverage of Bishop Gayle Harris’s July 2 sermon at the UBE Eucharist, in Mary Frances Schjonberg’s story here.  House of Deputies president Bonnie Anderson said at the gala that Bishop Gayle preached “bravely and eloquently about standing on the shoulders of others.”]