Moving toward the finish line

Posted on July 12, 2012 by Diocese of Massachusetts | Leave a comment

With adjournment looming, the House of Deputies got down to work early this morning, changing some rules of procedure to move things along faster.

Internal church matters have gotten a lot of focus so far at this convention, so it was refreshing to many observers when resolutions on poverty alleviation and creation care finally got to the floor yesterday.

Massachusetts deputy Jane Gould spoke for the eventually successful A135, which combined about six resolutions on poverty and racial justice that came before the Social and Urban Affairs Committee on which she served.  The intent, she said, was “to create a spirit of mindfulness about poverty and intentional conversation and prayer and to focus the human and financial resources of the church.”

The resolution calls for “teaching, preaching, organizing, advocating, and building mutually transformative relationships with those who are poor to focus our hearts and the mission of our congregations and dioceses on reducing poverty and increasing economic and racial justice.”  It includes a proposal from the church’s deacons association calling for prayer on these issues in all church meetings.

The deputies also approved and sent to the House of Bishops resolutions urging passage of the DREAM Act (D067) and advocating stricter legislation to reduce use of carbon-based fuels.  More on yesterday’s session is in Episcopal News Service’s story here.

Find the status of other resolutions here. 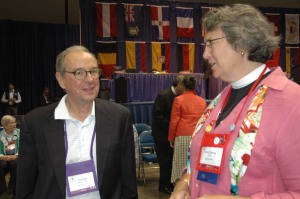 Bishop Tom Shaw and deputy Mally Lloyd during a joint session. Both were elected to the nominating committee for the next presiding bishop.

committee to nominate the next presiding bishop.  Massachusetts deputy Mally Lloyd was elected, along with Dante Tavolaro of Rhode Island, to represent the New England dioceses that make up Province I.  They join Bishop Tom Shaw who was elected to that committee by the bishops earlier in the convention.